Wikipedia - The Hymn of the Internet

Wikipedia is one of the greatest collaborations of the twenty first century. This collaboration has created one of the largest single sources of knowledge and information on the Internet. But it is only one of over a million sources of information that reside on the Internet. And just like all sources, it is not always accurate. Sadly this fact is not so widely known. But because the Internet is so good at informing its users, everyone will soon know that all sources of information, especially the ones that are not on the internet, are all vulnerable to inaccuracies. So the Internet is not just the largest source of information and knowledge on the planet, the internet also teaches its users to be aware of all of its flaws, which sadly is not the case with other media sources or social networks.

An Open System has it flaws and vulnerabilities, but because it is open, we have a chance to learn about these flaws, and thus reduce them, and thus making the open platform more accurate, more stable, and more reliable. The future looks bright.

How much hard drive memory space does Wikipedia need? When I convert a wiki page into a PDF it averages around 200 KB. So Five wiki Pages would be almost 1 Megabyte. 5,000 wiki pdf pages would be around 1 Gigabyte. So if I had 10 gig jump drive, I could easily have over 50,000 wiki pages in my hand. I have one of the greatest collection of Wikilinks. But without instructions, directions and explanations, almost all knowledge and information becomes meaningless and ineffective. 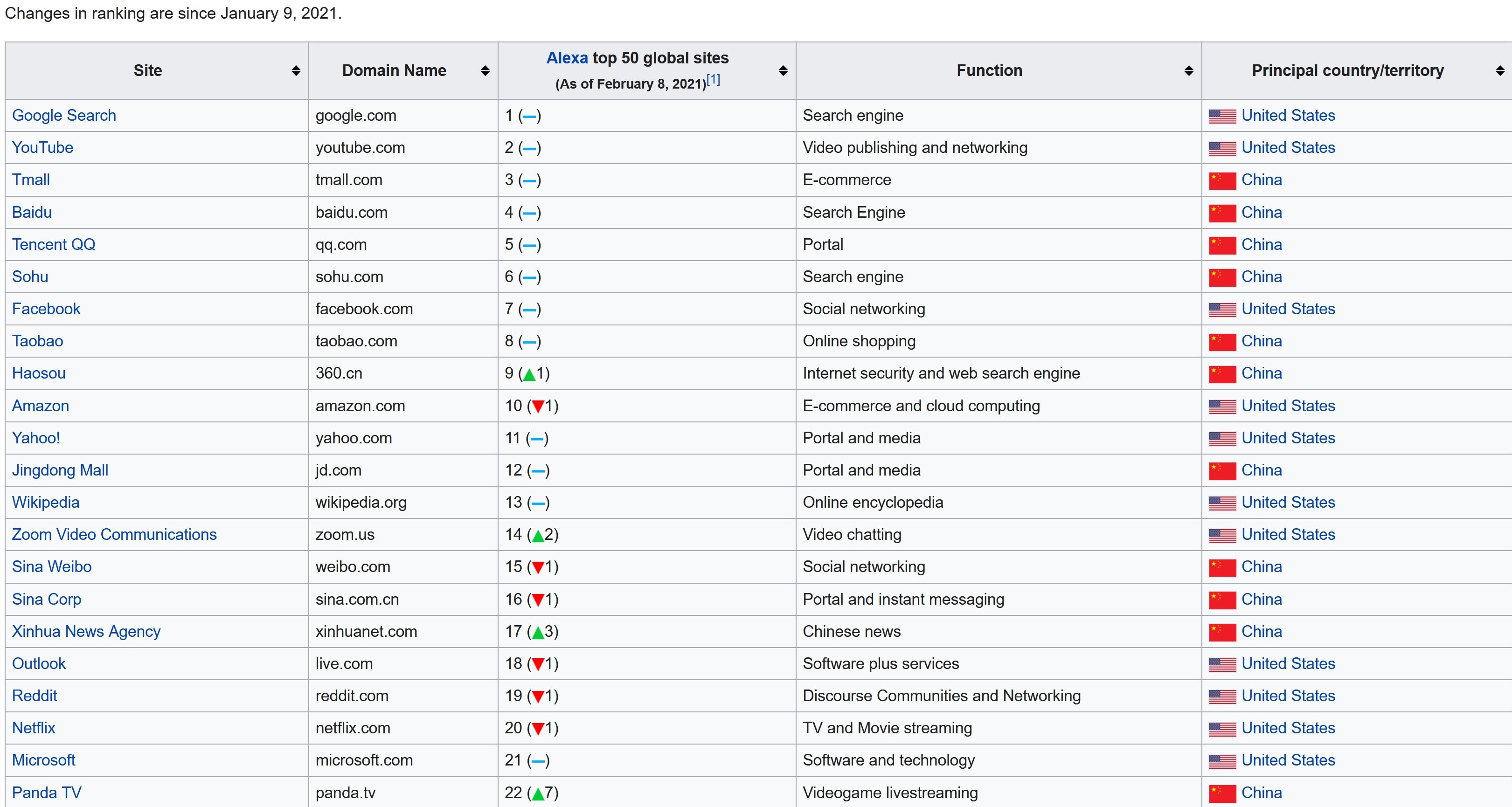 Wiki was introduced to the lexicon by computer programmer Ward Cunningham in 1995 when he created collaborative software that he called WikiWikiWeb. Wiki is Hawaiian for “to hurry; fast, quick.”

Not all Edits on Wikipedia are Good. I have read the same Wikipedia page twice several months apart and I have seen some interesting edits. Wikipedia is a wiki, meaning anyone can edit any unprotected page and improve articles immediately. You do not need to register to do this, and anyone who has edited is known as a Wikipedian or editor. Small edits add up, and every editor can be proud to have made Wikipedia better for all. There are two editing interfaces: the new VisualEditor (VE) and classic wiki markup editing (wikitext). Some pages are protected from editing and marked by a lock icon at top right. If you are not allowed to edit the page, it will have a "View source" instead of an "Edit" tab. You can still edit these pages indirectly by submitting an edit request: click "View Source", then "Submit an edit request" at bottom right, and an editor that is authorized to edit the page will respond to your request.

Assume Good Faith is a fundamental principle on Wikipedia. It is the assumption that editors' edits and comments are made in good faith. Most people try to help the project, not hurt it. If this were untrue, a project like Wikipedia would be doomed from the beginning. This guideline does not require that editors continue to assume good faith in the presence of obvious evidence to the contrary (e.g. vandalism). Assuming good faith does not prohibit discussion and criticism. Rather, editors should not attribute the actions being criticized to malice unless there is specific evidence of such. When disagreement occurs, try to the best of your ability to explain and resolve the problem, not cause more conflict, and so give others the opportunity to reply in kind. Consider whether a dispute stems from different perspectives, and look for ways to reach consensus. When doubt is cast on good faith, continue to assume good faith yourself when possible. Be civil and follow dispute resolution procedures, rather than attacking editors or edit-warring with them. If you wish to express doubts about the conduct of fellow Wikipedians, please substantiate those doubts with specific diffs and other relevant evidence, so that people can understand the basis for your concerns. Although bad conduct may seem to be due to bad faith, it is usually best to address the conduct without mentioning motives, which might exacerbate resentments all around. Be careful about citing this principle too aggressively. Just as one can incorrectly judge that another is acting in bad faith, so too can one mistakenly conclude that bad faith is being assumed; exhortations to "Assume Good Faith" can themselves reflect negative assumptions about others.

Editorial Oversight and Control. There are tens of thousands of regular editors - everyone from expert scholars to casual readers. With the exception of blocked users, anyone who visits the site can edit it, and this fact has encouraged contribution of a tremendous amount of content. There are mechanisms that help community members watch for bad edits, a few hundred administrators with special powers to enforce good behavior, and a judicial style arbitration committee that considers the few situations remaining unresolved, and decides on withdrawal or restriction of editing privileges or other sanctions when needed, after all other consensus remedies have been tried. Anyone can contribute to Wikipedia, and everyone is encouraged to. Overall Wikipedia gets hundreds of times more well-meaning editors than bad ones, so problematic editors rarely obtain much of a foothold. In the normal course of events, the primary control over editorship is the effective utilization of the large number of well-intentioned editors to overcome issues raised by the much smaller number of problematic editors. It is inherent in the Wikipedia model's approach that poor information can be added, but that over time those editing articles reach strong consensus, and quality improves in a form of group learning, so that substandard edits will rapidly be removed. This assumption is still being tested and its limitations and reliability are not yet a settled matter – Wikipedia is a pioneer in communal knowledge building of this kind.

Why some Wikipedia disputes go unresolved. An MIT study identifies reasons for unsettled editing disagreements and offers predictive tools that could improve deliberation. A full third of the discussions were not closed. Wikipedia offers several channels to solve editorial disputes, which involve two editors hashing out their problems, putting ideas to a simple majority vote from the community, or bringing the debate to a panel of moderators. Analyzing the dataset, the researchers found that about 57 percent of RfCs were formally closed. Of the remaining 43 percent, 78 percent (or around 2,300) were left stale without informal resolution -- or, about 33 percent of all the RfCs studied. (RFC is Requests for Comment).

"Wiki" pronounced witi or viti, is a Hawaiian word meaning "fast" or "quick".

Learn How to Create a Wikipedia Article (wiki)

Collaborations and discussions expose many truths, many ideas, many points of views and many beliefs. But not everyone can be right, but not everyone is wrong either. The only way that truth can be verified, along with the accuracy of information and knowledge, is by answering all the questions. But you have to know all the questions to ask in order to answer them. This is where the Internet gives us the best chance to accomplish this by allowing millions of people from all walks of life to participate in interactive feedback, open discussions, collaborations, debates, analytical reasoning, philosophy or anything else that would help us define our knowledge. This gives the human race for the first time in its existence a vast pool of ideas, resources and information. But of course this sharing of ideas and knowledge will not be free of problems or critics because all new advancements go through a learning period. But with the Internet, because of its ability to quickly connect and collaborate with millions of people, this learning time will be much less. The Internet is still just a baby, but this baby is growing up fast.

I have read over one hundred thousand Wikipedia pages, luckily I saved all the valuable pages and categorized them.


Wikipedia has over 5,433,541 articles of any length in English, and the combined Wikipedias for all other languages greatly exceed the English Wikipedia in size, giving more than 27 billion words in 40 million articles in 293 languages. 800 new articles each day.

Wikipedia Statistics - 90% of Wikipedia's Editors Are Male. As of February 2014, it has 18 billion page views and nearly 500 million unique visitors each month.

Wikipedia is the 6th most popular website in the world, with 22.5 million contributors and 736 million edits in English alone.

Ten things you may not know about Wikipedia (wiki)

Wikipedia Divisiveness. There is no express prohibition on "divisive" behavior on Wikipedia. Also, "divisive" is not really defined in any substantive sense. However, some feel that divisiveness between members of the Wikipedia community is against Wikipedia's policies and guidelines; and against the reason that Wikipedia exists. People holding this belief say that since Wikipedia is an encyclopedia, dividing Wikipedia contributors up into separated camps hinders rather than helps the process of creating and maintaining an encyclopedia. There is by no means a consensus on this point. Furthermore, given the above qualification, it is valid to ask the following question: what really does or does not constitute divisive behavior?

A large majority of the information and knowledge that is on the Internet is from the millions of books that have been written over the last two thousand years. So a lot of our knowledge has been around for some time. But the Internet is making all this knowledge available to more people then in any other time in our history. This creates more conversations, more collaboration, more opinions and more discussions, which in turn creates more knowledge that allows for more improvements, more progress, more advancements and more maturity.

What People Searched for on the Internet

Note: When using Wikipedia remember to check the sources at the bottom of each subject page for more information.

On Wikipedia, also check the discussions page on each subject for more opinions and points of view that might be informative. Reading the comments about products or services can be informative but they can also be misleading. So please be cautious and attentive.

The Bottom Line about Wikipedia: Wikipedia may not be perfect but Wikipedia has incredible potential. And like some things that improve over time, Wikipedia will become more reliable, more transparent, more organized and more comprehensive. But for now some areas of Wikipedia are inadequate, inaccurate and incomplete.